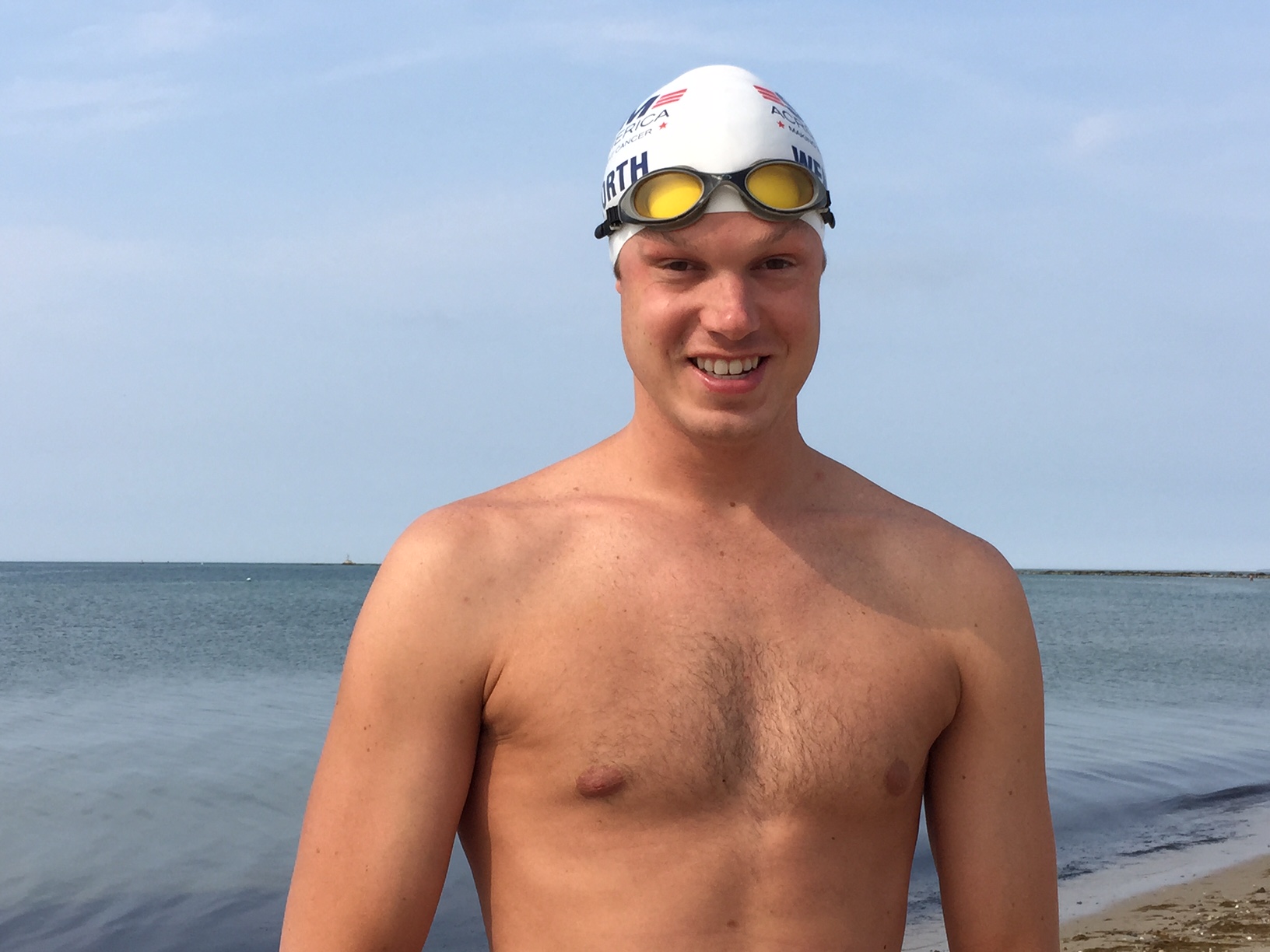 No one has attempted a solo swim across the 30 miles of open water between Nantucket and Cape Cod in nearly three decades. The only man known to have successfully completed a solo crossing is Paul Asmuth, an International Swimming Hall of Famer who swam from Nantucket to Hyannis in just over 12 hours back in 1986.

In July, the 28-year-old Nantucket summer resident will attempt a solo swim from Cape Cod to Nantucket – the opposite direction of Asmuth’s crossing in ’86 – in what will be an incredible test of his stamina, willpower and mental toughness.

“I’ve been looking out at this body of water my whole life,” Wentworth said, “and I think the idea was always in my mind: is this something that’s possible?”

Through the Swim Across America charitable organization, Wentworth is leveraging the Cape Cod-to-Nantucket swim to support Nantucket Cottage Hospital’s cancer care program, and has already raised over $100,000 from friends, family, and supporters.

And he will need all the motivation and goodwill he can get. The swim will be a crucible of endurance as Wentworth navigates miles of shark-infested open water over the course of 12 to 15 hours.

“Initially there were a lot of people who thought it was a crazy idea, but once that initial shock wore off, it’s been really incredible to see the amount of support that I’ve received both emotionally and fiscally,” Wentworth said. “It resonates with a lot of people for a lot of reasons, but mainly because all of us have had someone close to us who has cancer, or had cancer. It’s touched all our lives.”

The sheer logistics of the swim are imposing. Wentworth plans to embark from Cape Cod’s Seagull Beach in West Yarmouth around 1 a.m., swimming for the first few hours in the dark before sunrise. Ensuring his safety during the trek across Nantucket Sound will be a team of supporters aboard two boats and kayaks who will follow him along the way. Wentworth’s goal is to finish at Great Point – the northern tip of the island closest to Cape Cod – but given the uncertainty of the winds and tides, he knows his landing point could be anywhere along Nantucket’s north shore.

Rather than set an arbitrary date for the swim, Wentworth has targeted a weeklong window – July 24th to July 31st – in order to take advantage of the most ideal conditions in which to embark from Cape Cod.

“There are things you can control and things you can’t control, and the weather is the biggest wildcard in this,” Wentworth said. “Anyone who knows Nantucket knows the winds can change several times in a day.”

But what about the sharks?

“That’s really something outside of our control,” Wentworth says with a laugh. “It pops in your mind and there are precautions you can take and we are taking. I’ll have kayakers with an electromagnetic device called a ‘shark shield’ which hopefully acts as something of a deterrent. It’s something we all think about but not something you can train for.”

Wentworth was an athlete growing up, participating in a number of different sports, but he didn’t get into open water swimming until after he suffered a back injury following his college years at Princeton University. Swimming became part of his rehabilitation, and Wentworth eventually worked his way onto a Swim Across America team that completed a relay across the English Channel last year.

To prepare for the Cape Cod-to-Nantucket swim, Wentworth is training with the assistance of Chloë McCardel, one of the world’s most accomplished open water swimmers who has completed seven solo crossings of the English Channel, and won the 28.5 mile Manhattan Island Marathon Swim in 2010. McCardel set a world record in 2014 for the longest unassisted ocean swim when she covered 77.3 miles from South Eleuthera Island to Nassau, Bahamas in 41 hours, 21 minutes.

“When I mentioned to her last summer that I was thinking about this, she was really excited to get behind it,” Wentworth said of McCardel. “She’s been coaching me through the winter.”

Wentworth is now training by swimming about 40 kilometers every week and preparing his body for the open water conditions – what he calls core climatization.

“I’m confident my body will hold up at this point,” he said. “Now it’s the mental challenge of working through various conditions in that 12 to 15-hour window.”

And even as he prepares for the swim and considers all the factors and conditions necessary to make it a success, Wentworth is still hoping to raise even more money on top of the $100,000 he has already solicited for Nantucket Cottage Hospital’s cancer care program. Through a partnership with the Mass General Cancer Center, NCH is now bringing a team of world-class oncologists to Nantucket to see island cancer patients, allowing them to stay close to home for as much of their oncology care as possible.

“Cancer has touched all our lives, and there are a lot of cancer charities out there, but the Nantucket community is something I feel close to from my time there,” Wentworth said. “So for a swim in the water up there, I couldn’t think of a better cause to be the recipient of this.”

To donate to Wentworth’s swim, visit his Swim Across America page.

To get actively involved with Swim Across America on Nantucket, please participate in the annual island event happening this year on August 22nd. Swim Across America Nantucket also supports the NCH oncology program in addition to Palliative and Supportive Care of Nantucket (PASCON), and this year’s goal is to raise $300,000 for on-island cancer care. Support a local swimmer, join a team or volunteer! Learn more on the SAA-Nantucket web site.