Beginning on October 18th Nantucket Cottage Hospital will be offering booster shots of Pfizer’s COVID-19 vaccine to those who meet the eligibility requirements below. Boosters are by appointment only and can be made online at https://covidvaccine.massgeneralbrigham.org/

COVID-19 boosters are not yet available for individuals who received the two-dose Moderna, or the single-dose Johnson and Johnson vaccines. The CDC has only authorized the Pfizer boosters for individuals who have completed the primary series of Pfizer at least 6 months previously.

At this time, the definition of fully vaccinated has not changed. Individuals are considered fully vaccinated two weeks after their second dose of either mRNA vaccine series (Pfizer or Moderna) or after the single dose of the J&J vaccine. 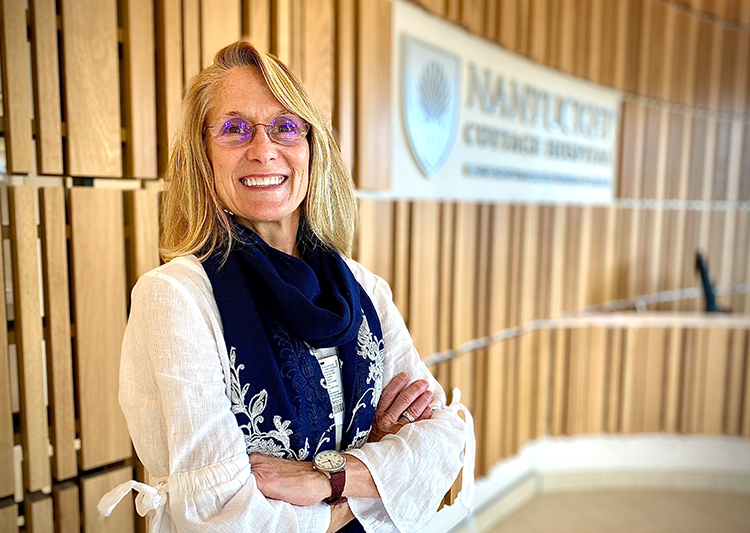 Debbie Dolan thought she had seen it all when after 30 years as a nurse, she was asked to step in to briefly support a hospice program in North Central Pennsylvania.

“I remember being so resistant to the idea of working in hospice, thinking ‘oh no I don’t want to do that!’” said Dolan. “But the first day I was there, I loved it. It was like being hit over the head and realizing I found what I wanted to do for the rest of my life.”

Now, after 15 years working in palliative care and hospice, Dolan has been selected to lead Nantucket’s Palliative Care program supported by PASCON, as the program’s newest director. As the new director, Dolan will lead a team of health care specialists dedicated to providing physical, psychological and spiritual care to individuals on Nantucket with life-threatening illness as well as their families, at no cost to the patient.

“This position really is a gift. It took me 30 years to find this passion, and now I’m here with an opportunity to give back to the community, to hear people’s stories, to protect them, respect them and carry their legacy on. That’s an honor,” said Dolan.

For Dolan, joining the organization in the wake of a global pandemic has presented a number of opportunities she hopes to capitalize on moving forward.

“We’ve seen so much of our lives transition to online platforms over this last year, and it’s provided us with a new avenue to reach patients and families where they’re most comfortable,” said Dolan. “We’ve created virtual cancer support groups, our clinical psychologist holds regular caregiver and bereavement support groups over Zoom and our clinicians have adapted to meeting patients and families virtually.”

While advances made in virtual communication have helped facilitate many of the interactions Palliative Care has become known for throughout the pandemic, Dolan believes that the core work of Palliative Care doesn’t rely on any one medium, but rather the relationships its staff has been able to build throughout the community.

“Palliative care is about serious illness care. It’s about working with a patient, their family and their care team so that they can realize their goals and live the kind of life they’re looking for,” said Dolan. “So much of that work revolves around face-to-face meetings where a patient lets us into their life and we learn about their values, their hopes and the life they want to live, then having the difficult conversations around how to get our patients where they want to be.”

Regardless of the medium, the central role of Palliative Care and PASCON revolves around one major tenet; ensuring patients are able to plan for and live the kind of lives they desire.

“The goal is always to meet people wherever they need us, whether it’s in a clinic, here in the hospital or in their home, and figure out how they want to live their lives,” said Dolan. “Once we can help a patient answer that, we’re on the path to delivering the kind of high-quality, personalized care that everyone in this community deserves.”

From Porch Collapses to Plane Crashes: How 9/11 Changed Emergency Preparedness at NCH

Most Americans can recall how following the September 11th attacks, the nation changed overnight. The attacks impacted everything from how we navigated airports, to how Americans conceptualized national security, shaping the 21st century for the two decades to come.

As Americans reimagined their lives in the face of these new threats, leaders at Nantucket Cottage Hospital were reimagining their role in Nantucket’s emergency preparedness.

“Before 9/11, hospitals used to be isolated organizations, when we thought about emergency management, we planned solely for ourselves, there was no interagency coordination, no system-level thinking for how to respond to a crisis,” said Martha Lake-Greenfield, NCH’s Emergency Department Manager from 1996 to 2020. “In the wake of 9/11 it became evident that we all had a role to play in emergency management, from your government agencies, to local hospitals and even individuals.”

In the years following the attacks, the Department of Homeland Security developed the National Incident Management System (NIMS), a comprehensive approach to coordinating government and private sector partners during disasters and emergencies.

“We had been working to develop a common emergency management language amongst our government partners before 9/11, but after the attacks, as more incidents happened, we began to develop that common language and common mission by using NIMS,” said Lake-Greenfield.

Today, every staff member at NCH undergoes NIMS training through the Federal Emergency Management Agency (FEMA), to ensure that in the case of an emergency, all staff members understand their role and responsibilities during a worst-case scenario.

“We always build our plans off a worst-case scenario because that’s when we can identify issues like staffing, stress and resource constraints,” said Georges Beckford, a New York firefighting veteran and Nurse Educator at NCH. “During a disaster, some people naturally respond well, and some collapse, that’s why its so important to train and prepare your team so they have that experience to fall back when a disaster strikes.”

In the decades following the September 11th attacks, NCH has consistently worked with public and private partners to ensure a high degree of preparedness should a disaster ever strike Nantucket.

“When I first came to NCH, the largest emergency incident we had was a porch collapse, after 9/11 we went from preparing for porch collapses to preparing for plane crashes,” said Lake-Greenfield. “We started to run more and more drills, when there was a major event on Nantucket, we would physically take out the supplies we would need and run through how we would use them during a crisis.”

One of the most significant changes since the attacks, according to Beckford, is the level of interest the public has in playing their part during disasters.

“All the knowledge we were developing as first responders or clinicians we would turn around and give it to the public,” said Beckford. “The public began making emergency kits, learning first aid and had an enormous appetite to learn about what they can do to prepare themselves and their families for an emergency. This preparedness meant that patients could be stabilized well before they arrived in our emergency room.”

Two decades after the September 11th attacks, Americans are more prepared than ever to respond to a disaster, both through individual desires to stay safe during an emergency, but also through the lessons learned over decades of training and responding complex emergencies. Nowhere is this refined preparedness more evident, than in today’s hospitals, as we emerge from one of the most complex crises demanding interagency support, and public understanding.

“COVID-19 has reiterated this need for preparedness, today, everyone from our housekeepers to our labor and delivery nurses are trained in emergency management, because as we’ve seen during these last 18-months, we expect everyone to play their role during a crisis,” said Lake-Greenfield.

Evidence continues to demonstrate that the COVID-19 vaccinations offered here on Nantucket (Pfizer, Moderna and Johnson and Johnson) are remarkably effective for reducing risk of serious illness caused by COVID-19. While effective, the immunocompromised population is still vulnerable to COVID-19 because of their high-risk status for serious, prolonged illness and weakened immune systems.

The CDC recommends people who are moderately or severely immunocompromised should consider and consult with their healthcare provider on receiving a third dose of their mRNA COVID-19 vaccine.