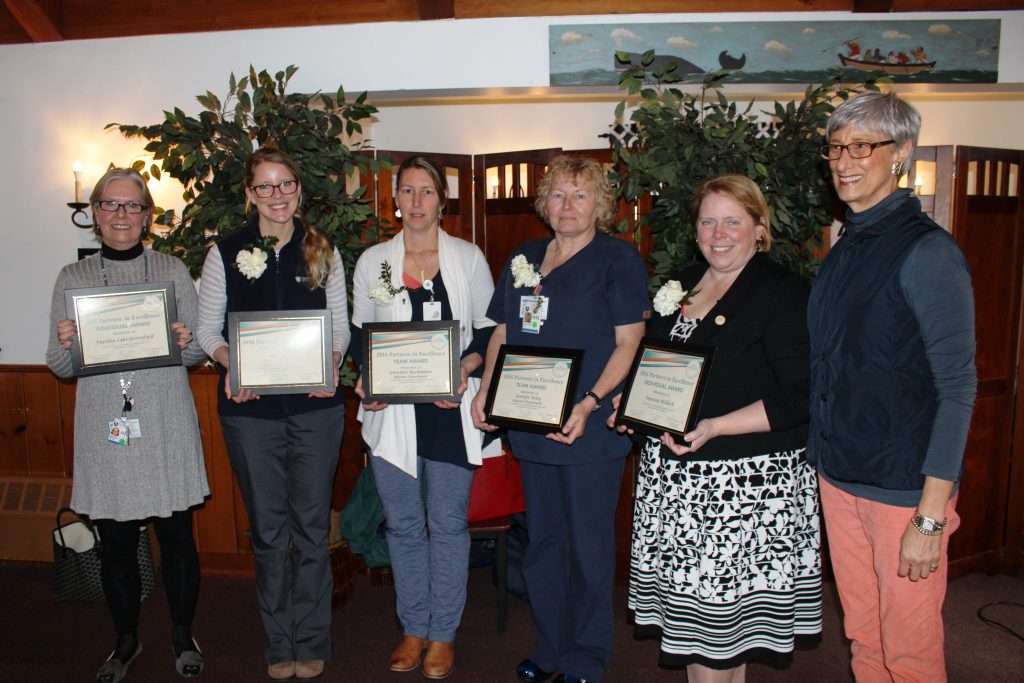 Nantucket Cottage Hospital honored the recipients of the annual Partners in Excellence awards, which recognize superlative performance throughout the Partners HealthCare system, during a ceremony today at Faregrounds Restaurant.

The awards were presented Tuesday by Nantucket Cottage Hospital President and CEO Dr. Margot Hartmann, who offered the following comments about each of the recipients:

Amanda joined the NCH Revenue Cycle Department in November of 2011 having just moved back to the island. Amanda is known throughout the department as a team player and someone who was always willing to help out.   In December of 2014, Amanda was promoted to a supervisory role in the Revenue Cycle Department.  In this role she worked with and assisted her colleagues in ensuring revenue cycle operations in the emergency department ran smoothly.

Amanda’s nomination read:  “Amanda is a manager who leads by example. She involves her staff in a way that let’s all of us know that we don’t just work for her, but we work with her.  She initiated a daily video message and further expanded it to include staff doing video messages to the team on “What Customer Service Means to Me.’ Amanda’s leadership and innovation make her a very deserving PIE Award winner.”

Martha is known and respected not only at NCH but throughout the Nantucket community for her collaborative work with the Town’s Emergency Management Committee, where she is a vital member of the team. Her PIE nomination read: “Martha is always ready to lend a hand in the Emergency Room.  She is the first person we call when we have a hard stick IV.  She is known for her open door policy.  Martha makes it a point to check in with her ED staff as well as other staff throughout the hospital on a daily basis.  She is a great role model for team work and shows it every day.”

The Clinical Infusion Nurse Team provides a wide variety of services to meet the needs of island patients who require Infusion/Injection Therapy.   These nurses are experts in the care of oncology patients that require chemotherapy and immunotherapy as well as hydration and or anti/infective therapy.  The team has treated over a 1,000 patients since early 2016. The increased patient population is the result of new programs offered to the island and its seasonal and year-round population.  Patients have spoken to the “personal investment” that represents the nursing care as well as the loyalty to the plan of care that includes family members.  This nurse team makes a wonderful contribution to the growing value of this clinic, seen daily in the many benefits they offer patients.  Under the leadership of Libby Tracey, this wonderful team of professionals are well deserving of the PIE Team Award.